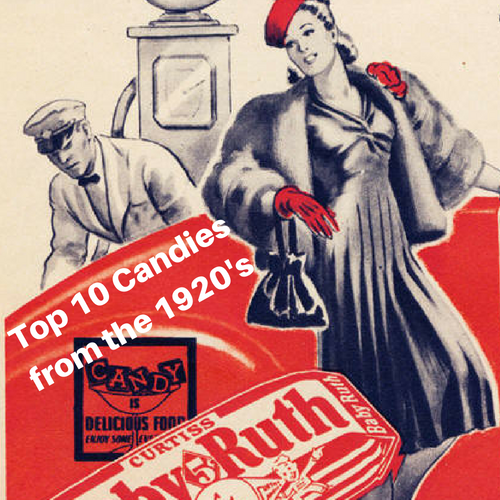 During the 1920s, the world was changing, and people were becoming bolder – there was much more of a rebellious attitude at this time. The fashion has completely changed, especially for the ladies, and organized crime was a common thing, fueled by prohibition. Despite everything that was happening in the world, there was a lot of delicious new candy to be had. Here are some of the popular 1920s candy treats.

The old-fashioned Oh Henry Chocolate Bars were brought to us by Tom Henry from Arkansas City, Kansas, in the year 1919. Tom Henry had a candy company known as The Peerless Candy Factory. He was probably inspired by the wafting scent of all that sweet candy. He wanted to cash in on his chocolate bar, which went by the name of Tom Henry.

Eventually, Henry decided to sell his namesake chocolate bar in the year 1920, to the Williamson Candy Company. That is when this chocolate bar got renamed the “Oh Henry”. They say it got this name because there was a young and curious boy who loved to frequent the Williamson Factory. Whenever he visited, he especially loved to assist all the young ladies working, and they could often be heard calling for help from Henry, hence the name ”Oh Henry”. Up to now, the Oh Henry Chocolate Bar remains just as delicious as it was back in the 1920s.

For more information on the 1920s  candy you should try, visit our website at  https://www.candydistrict.com/